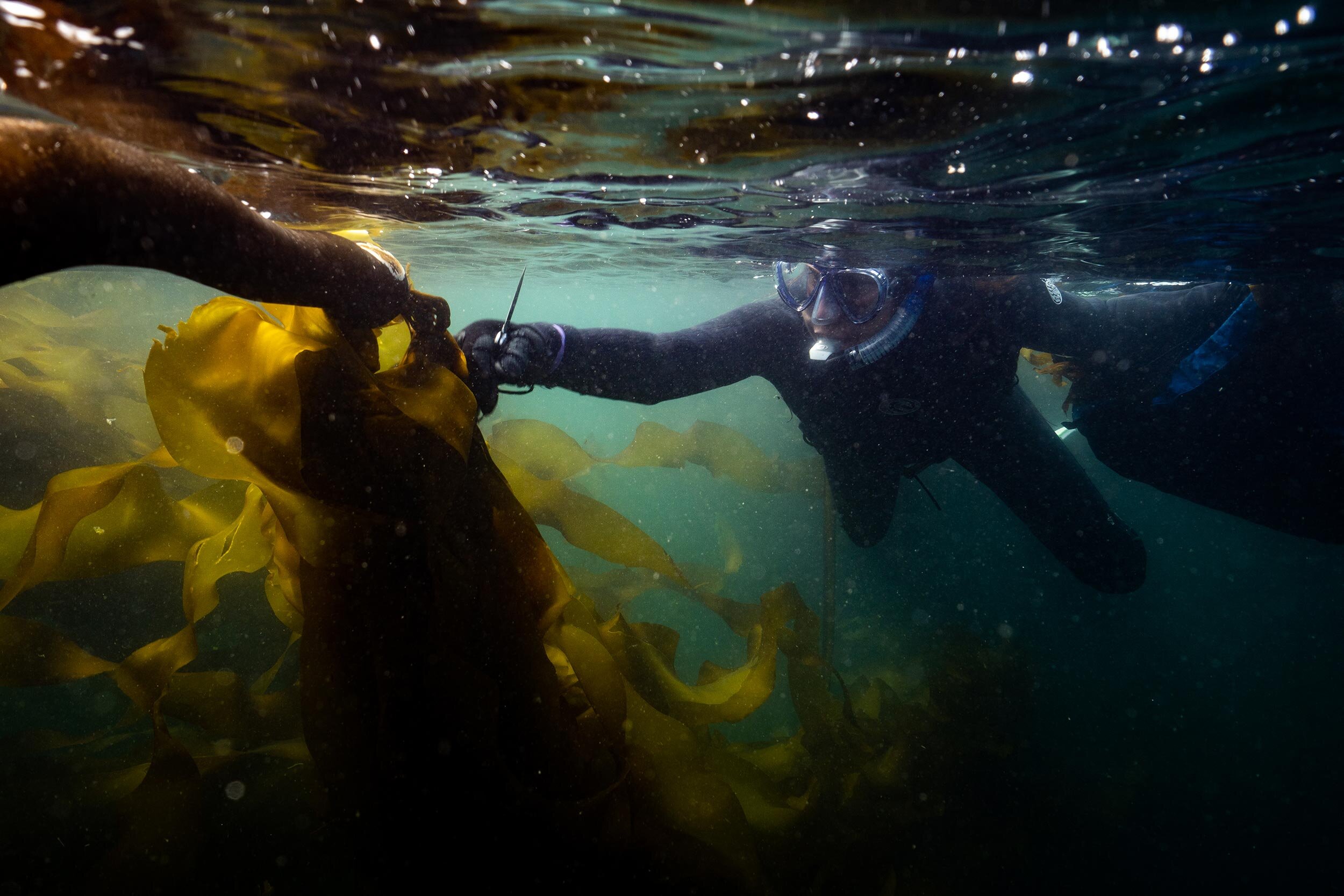 For the final webinar of Slow Fish 2021 all eyes were on seaweed, a new frontier in the ongoing battle between conservationists and the ever-hungry forces of globalized capitalism.

The many benefits of seaweed

The first speaker was Amanda Swinimer of Dakini Tidal Wilds, a seaweed harvesting business she’s been running off the west coast of Vancouver Island, Canada, since 2003. She provided a concise introduction to the all reasons why seaweed should be of great interest to humanity. “The three main families of seaweed—red, green and brown—all have their own nutritional and sensory profile. But their importance goes far beyond their potential in the kitchen. They absorb about a third of the atmospheric carbon dioxide, and produce between 50 and 80% of our oxygen. What many people don’t know is that they also release iodine that contributes to cloud formation. They absorb heavy metals and toxins in the ocean, transforming them into non-reactive, less harmful forms of those toxins, thus helping to clean the ocean. Put simply,  all life in the ocean depends on algae.”

But there are serious existential threats to this vital ecosystem, as Amanda explained. “Kelp forests are declining globally by 2% per year, and the warming ocean temperature is the most significant driver of this decline, though it’s not the only one. Extreme weather events like marine heatwaves can stop seaweed from reproducing or kill it outright. And where it dies, the incredibly rich and biodiverse ecosystem is replaced by a turf ecosystem that has nowhere near the same level of biodiversity or productivity. And so we stand to lose an important source of nutrition—seaweed being among the most nutrient-dense foods in the world—a vital provider of ecosystem services, and even an ancient medicine. One of the oldest surviving medical texts from Ancient Egypt, the Ebers Papyrus, discusses their therapeutic uses.”

Limu: revitalizing an ancient connection to the sea

Next up was Nalani Kaneakua of Kauaʻi, the fourth-largest island in the Hawaiian archipelago. Here she’s been involved with projects to connect young people with limu (seaweed). “We grow limu in the waters around our island, and getting kids into the water to learn about the ecosystem is part of a wider educational program to maintain Hawaiian cultural traditions and practices. We count fish, learn the nature of the tides, recognize the birds, seal and turtles. And limu is an important part of that: it’s not just seaweed, it is life. Raising the next generation of practitioners and passing on this knowledge is something that every generation before us has done, and which we must continue to do if we are to keep these traditions alive. Losing that knowledge would mean losing part of our culture.”

This process of knowledge transfer isn’t always easy in the modern world. “In 2014 we created Lima Hui, which really means seaweed community or seaweed organization, to identify all the experts among the kūpuna (elders) of our island. It’s since grown to include 50 practitioners committed to protecting the future of our limu, but those two strands of our work are continuous: both finding and preserving the practices of the elders, and teaching them to the young people by getting them into the water. That’s how we can help them form an emotional connection with the ecosystem, and make sure they go on to care for it for the rest of their lives and continue the cycle.”

John Fitzgerald of Atlantic Irish Seaweed treated us to a whirlwind tour of seaweed’s historic importance, both for the peoples of the past and the industries of the present. “The monks of Skellig Michael, at that time considered the edge of the known world, ate dillisk seaweed (Palmaria palmata) every day to get their vitamins. When the island was raided by the Vikings in the 9th century, those same Vikings were also eating the same seaweed to avoid getting scurvy. A lesson the British Navy wouldn’t learn until the 18th century. So seaweed has been a huge part of the food culture of these remote populations on the edges of Europe for centuries. It’s what allowed the Vikings to stay healthy at sea for such long periods, and thus to open up all the trade routes they did, from the Middle East to North America.”

Vital for the sustenance of life in ancient times, seaweed found a new role in the propagation of death in more modern times, as a vital ingredient in the production of gunpowder. “There was lots of money being made in that industry. The word kelp originally referred to describe the ash of burnt seaweed, and that’s what was done with kelp. It was burned to make potash, the main component in gunpowder production in Europe for centuries. The Irish, Scottish and French coasts were all ransacked for this resource. The United States destroyed the majority of the kelp forest off the coast of San Diego to produce potash after they entered the First World War. It’s not still not recovered, more than a hundred years later.”

After the war, the industrial exploitation of seaweed shifted into a new phase: the production of carrageenans, the “ultimate gelling agent” used in the food industry—also known as E407. It’s extracted from Rhodophyta, the red family of seaweeds. “It’s used in everything, from salad dressing to ketchup, ready meals, processed meats, toothpaste, shampoo.”

Fisheries Education Specialist at the Maine Center for Coastal Fisheries, Paul Molyneaux, explored what the future holds for industrial exploitation of algae. “I’ve been working with the sea for a long time, and I’ve seen different patterns of exploitation, from when I was a commercial fisherman to the new interest in seaweed as a source for biofuels. This push for seaweed farming started around 12 years ago, with DuPont and Cargill. They want to use seaweed to produce all sorts of industrial chemicals, and they’ve got the support of the US Department of Energy in this venture. DuPont has already bought the largest seaweed processing plant in the state. It’s a stepping stone to chemical production.”

As ever, when corporate power infiltrates a system, there’s a swift concentration of power into very few hands. “We saw it before in New England, with salmon farming,” Paul continues. “As the herring fisheries collapsed due to overfishing in the 1980s the government promoted aquaculture, the idea of turning fishers into salmon farmers. But what happened there? By the mid-1990s just four companies controlled the entire sector, and now just one company owns all these salmon farms. It will happen with seaweed too: DuPont will scale up and buy leases, putting the small leaseholders out of business.”

There are, according to Paul, four different approaches among the groups interested in aquaculture, including seaweed farming. “The first are the high entropy group. They have to money invest and will exploit the resources until profit margins shrink; then they’ll move on to the next thing. Second there’s the techno-optimists who believe we can solve whatever problems we have—and which we’re creating—with more technology. Third there’s the nature first group who admit that aquaculture and seaweed farming is bad for the environment, but will accept it in limited terms if protected areas are preserved. Again, it’s a rather naïve outlook. Fourth and finally is the group I think I belong to, who believe in being integrated with the environment and utilizing rather than exploiting our limited and precious resources.”

The history of other struggles over resources teaches a rather plain lesson. “These corporate interests are coming to take our resources and they don’t care about us, they’re fine with killing us if necessary. So if we don’t get organized and fight back we don’t stand a chance of defending this heritage. Playing nice with the corporations is foolhardy. It’s never worked.”

As moderator Severine Von Tscharner Fleming summed up, in order to establish a seaweed commons and ensure that people take an interest in this crucial topic—and thus exert citizen pressure on authorities—it’s vital to get as many people involved as possible, and as Nalani does, get people in the water. “Because statistics can be confusing and scary but they’re also easy to ignore. The important thing is for people to develop an emotional bond with marine ecosystems, to care for them.”

As Amanda Swinimer summarized, “The most important way we can ensure a respectful and ethical relationship with seaweed, like with any other natural thing, is to share our passion for it with other people, especially young people. That emotional connection is what inspires us to fiercely protect our planet. All life evolved from algae. If we can tap into this ancient connection, we can create a ripple effect and heal our relationship both with nature and each other.”