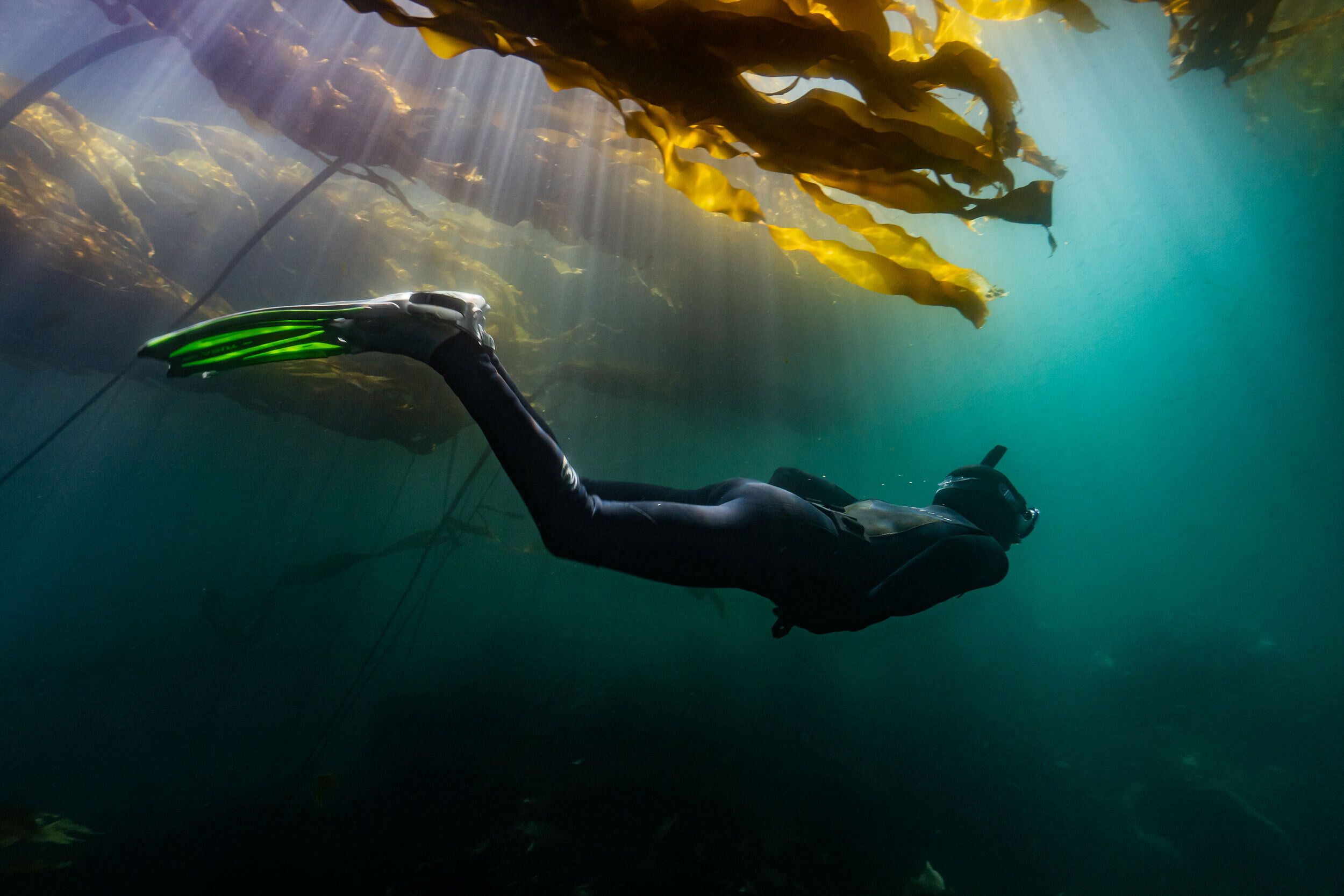 The wonders of seaweed

Perception is everything: though it’s often seen as a niche or novelty product, seaweed has been used as food by coastal societies around the world for thousands of years.

There’s a growing interest in algae as food nowadays, and not just because they’re delicious. On an ecological level they offer some incredible advantages: they require no fresh water, deforestation or fertilizer to grow, and provide shelter to countless species.

One woman pioneering a new approach to seaweed in the Pacific Northwest is Amanda Swiminer, founder of Dakini Tidal Wilds on Vancouver Island, Canada. Her hand-harvested seaweeds send a powerful message, an example of a healthier and more mutually-beneficial relationship between humans and the sea, a topic she explores in an exclusive Food Talk for Slow Fish. We spoke to Amanda about her life and work.

What are your earliest seaweed memories? How did you become interested in them?

The first seaweed I ever saw is called Ascophyllum nodosum. It is a beautiful golden colour and lines the rocky shores of Nova Scotia, where my dad is from. I studied algae physiology in university, but was more drawn to their ecological role and their value as a food than anything else.

When I moved to British Columbia I got into wild-crafting. I began selling wild-crafted plants to restaurants and making teas, tinctures, oils and salves and selling them at Farmer’s Markets. In one of my wild-crafting books, there were three seaweeds listed. I went down to the beach in front of the cabin where I was living at the next low tide and found one of the seaweeds from the book, Alaria marginata, or “winged kelp.”  I cut it like the book said to, leaving the reproductive sporophylls intact and several inches of the blade attached to the rock. I harvested about ten long blades that day, took them back to my cabin and hung them up to dry. That was twenty years ago and I have been harvesting ever since.

What is special about the biodiversity on the coast of Vancouver Island? As well as algae species, what other animals feed on these plants, besides humans?

Seaweeds belong to a very large and diverse group of organisms called “algae,” which include photosynthesizing microscopic bacteria-like organisms called microalgae, and seaweeds, formally known as macroalgae. Macroalgae, or seaweeds, are further divided into three main groups: red seaweeds, brown seaweeds and green seaweeds. Kelps are brown seaweeds that belong to the order Laminariales. The most voracious eater of kelp are sea urchins, and the balance between sea urchins and their predators is essential to the health of kelp forests. Other animals that consume seaweed in the Pacific Northwest are shellfish such as limpets and abalone, and some crustaceans.

How has the public perception of algae as a foodstuff changed since you started selling it in 2003?

For the first eleven or twelve years after I started my business, Dakini Tidal Wilds, in 2003, I sold my seaweed to health food stores and only one restaurant, which served raw, vegan cuisine. My clientele at that time was primarily people wanting to enjoy the tremendous health benefits of seaweed. Seaweed is an unfamiliar food in the West, and unfortunately it had developed a reputation as being “strange and fishy-tasting.” Around 2014, seaweed’s reputation began to shift from weird to wonderful. I was thrilled that seaweed was becoming recognized not only for its health and nutritional properties, but also valued for its unique umami flavour. I credit this wonderful achievement in large part to the incredible talent and admirable values of many of today’s trailblazing chefs.

You’re understandably proud of the great variety of algae you harvest – can you tell us something more about their gastronomic uses?

Winged kelp has a chewy texture and has a mild, briny flavor. My favorite way to eat it is either cut into small bite-sized pieces in soup, where it adds flavor to the broth, or soaked and wrapped around fish before baking or grilling. The seaweed keeps the fish very moist and becomes crispy when cooked this way. Bull kelp has a strong umami flavour which imparts a tingling feeling on the tip of the tongue and is one of the saltiest tasting seaweeds. It is great as a seasoning, simply ground up and sprinkled over savory dishes, fish, salad and popcorn. Its intense flavour also makes it a wonderful base in sauces such as pesto.

What are the biggest threats to the marine ecosystem of Vancouver Island, and what action is being taken to preserve the ecosystem?

Climate change is the largest threat to the marine ecosystem of Vancouver Island. Kelps require cold water in order to reproduce and survive. Bull kelp, one of the two canopy-forming species of our kelp forests and the second largest seaweed in the world, is especially sensitive to very small increases in temperature. An increase of just 3°C can determine their fate. For example, a study by phycologist Braeden Schiltroth found that sea surface temperatures of 17°C have a negative effect on spore formation and at 20°C spores were killed.

Another serious threat to Vancouver Island’s marine ecosystem are potential oil spills. The building of the Trans-Mountain Pipeline, a proposed 980km long pipeline that will transport diluted bitumen from the Alberta tar sands to a marine terminal in Burnaby, will see a sevenfold increase in supertanker traffic through the Juan de Fuca Strait where I live and harvest. An oil spill would be catastrophic to the marine ecosystem. Significant public pressure and multiple court cases caused the company who was planning to build the pipeline, Texas-based Kinder Morgan, to abandon the project. Unfortunately, in a stunning move by the federal government of Canada, they bought the project in 2018 with $4.5 billion of taxpayers’ money.

To date, eight federal court challenges have been filed by the municipalities of Vancouver and Burnaby, the Tsleil-Waututh, Squamish, Kwantlen and Coldwater First Nations and the provincial government of British Columbia. The six First Nations won their case in the Federal Court of Appeal in 2018: the courts agreed that they were not adequately consulted before the pipeline was approved. The provincial government of BC as well as several municipalities, including the capital, Victoria, and the largest city, Vancouver, are opposed to the project: specifically to the increase in oil tanker traffic on our coast.

Another serious threat is clear-cut logging. Because the logging on Vancouver Island is done in mountainous rainforest, it causes many landslides that throw huge amounts of silt and sediment down the creeks, which then makes its way to the oceans where it smothers seaweeds and also covers up rocks that seaweeds need in order to attach. There are locally-organized protests in many communities putting pressure on the provincial government to change to selective logging practices and leave very steep areas alone.

Are there any other important lessons that you try to impart to people about algae and the environment?

Yes! Algae, including seaweeds, are essential to our survival. It’s estimated that half our global oxygen is produced by algae, with some estimates as high as 80%. It’s also estimated that algae absorb a third of atmospheric carbon dioxide. Algae are the primary producers of the largest ecosystem on earth: the ocean. Kelp forests are one of the most productive ecosystems in the world. Because seaweeds often live in extreme environments and are exposed to large differences in temperature, salinity, and strong wave action, they have developed biologically active compounds not found anywhere else in nature that have remarkable abilities to support human health too.

What does it mean to you, to be part of the Slow Fish network?

Slow Fish gives me hope knowing that there are thousands of people from all walks of life who are doing it good, clean and fair and who are committed to healing our ocean food systems, and to protecting the ocean ecosystem. My ambitions are for Slow Fish to keep taking meaningful action to protect biodiversity and cultural diversity, something I am already seeing with the amazing Slow Fish network here in Canada, North America and the international network. I can count on the network to listen and help out when there are threats to the wild seaweed ecosystem where I live and harvest.

Amanda Swinimer will present a Food Talk on the beauty of seaweed as part of the Slow Fish digital program on June 25.